6234 shares
Disclosure: *This post may include amazon links. As an Amazon Associate, I earn from qualifying purchases.
Jump to Recipe Print Recipe

There are a few foods that trigger a childhood memory. This almond danish puff pastry is one of them. I loved when my mom would make this breakfast pastry for a church breakfast or company. I couldn't wait to steal a piece. Every time I make almond Danish puff pastry I always wonder why I don't make it more often. It is light and fluffy with a double crust and full of almond flavor. 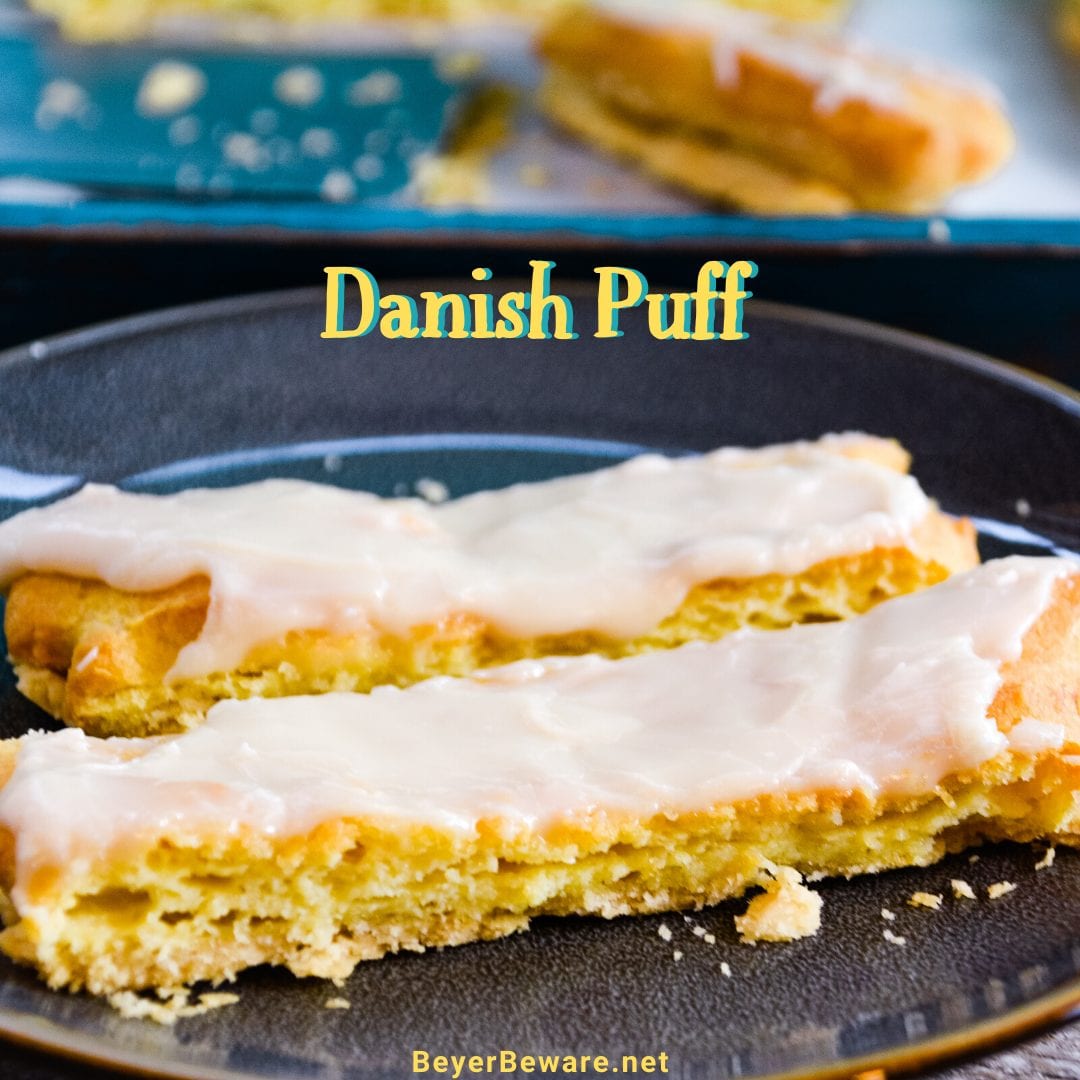 Almond Danish Puff Pastry has a flaky thin crust with a soft eggy bread layer that is drenched in almond flavoring and then covered with a light almond icing. Between the textures of the two different kinds of layers and the icing combined with the almond flavors, this stuff is what will make you late for church.

What is Danish Puff?

Danish pastry consists of two layers. A flaky first layer followed by an egg-based bread layer and then drenched in an almond glaze. It is delectable. 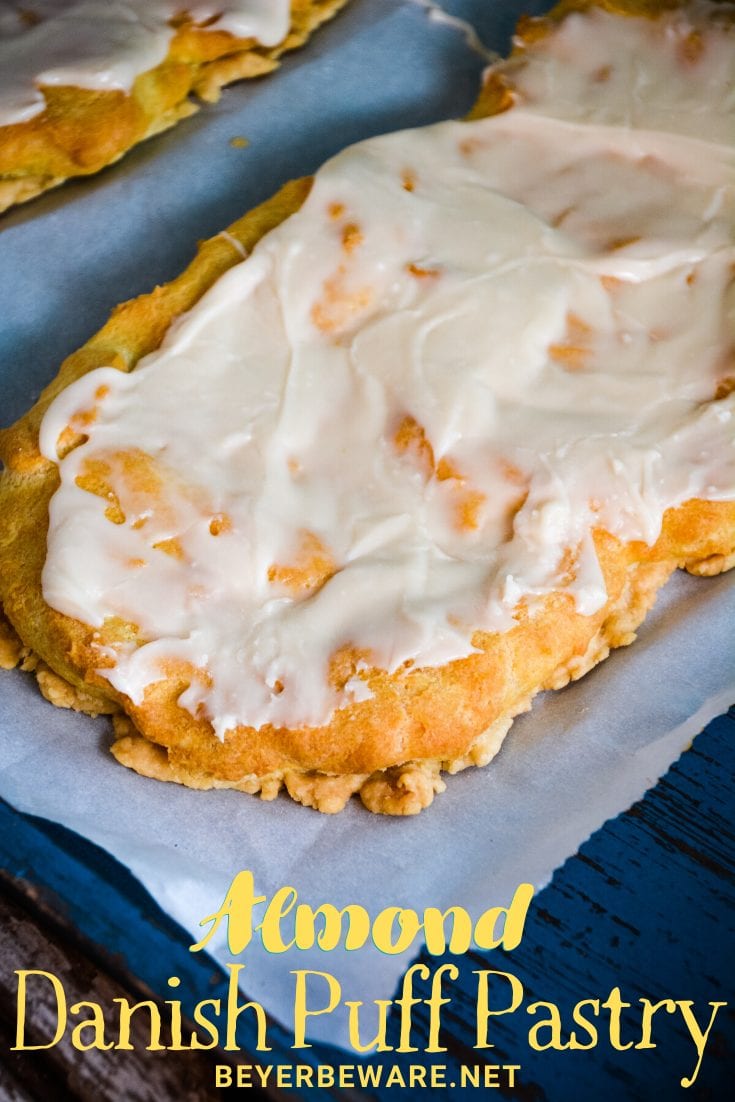 To make the flaky crust, cut butter into flour and sprinkle water to blend the dough. Mix together with a fork and form into a ball. It will really resemble pie crust dough at this point.

Split the dough ball in half and begin pressing each half out on an ungreased or parchment paper-lined cookie sheet. You will form two ovals that are about 12 inches by 3 or 4 inches wide. Have the two ovals about three inches apart on the cookie sheet. 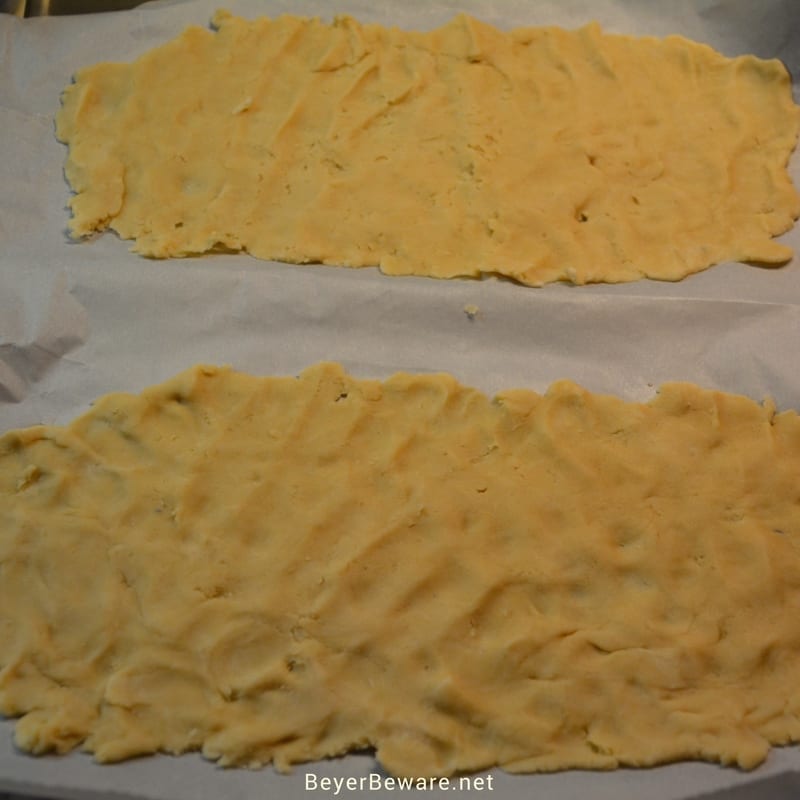 Now for the egg bread layer.

Bring a cup of water and ½ cup of butter right to a boil without boiling. Immediately remove from heat and add the teaspoon of almond extract followed by the clour. Stir constantly so there will not be lumps in the dough. The dough will be nice and smooth. 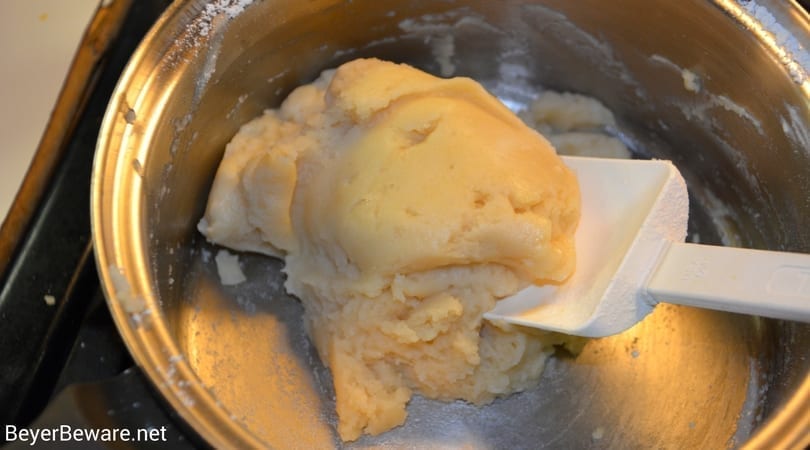 Then begin adding the three eggs one at a time, stirring to combine completely into the dough. 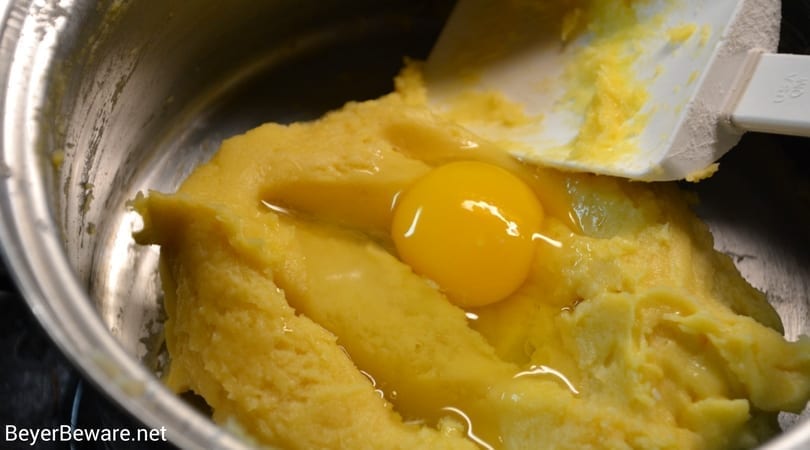 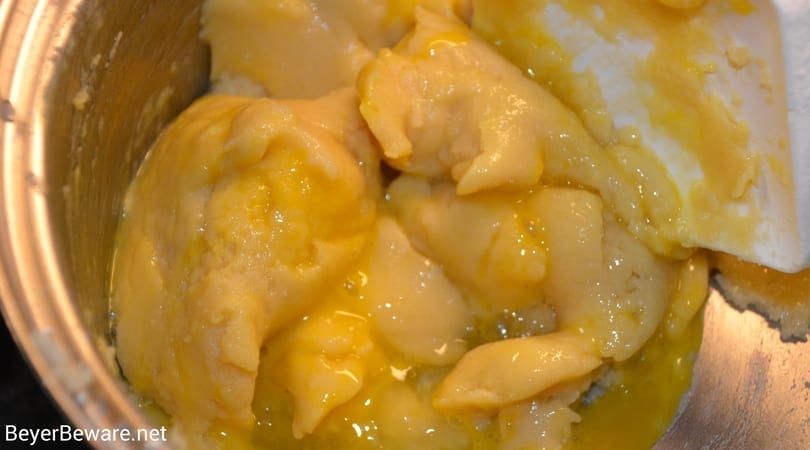 Spread half the dough on each oval. Then bake at 350 degrees for 60 minutes or until it is light brown. 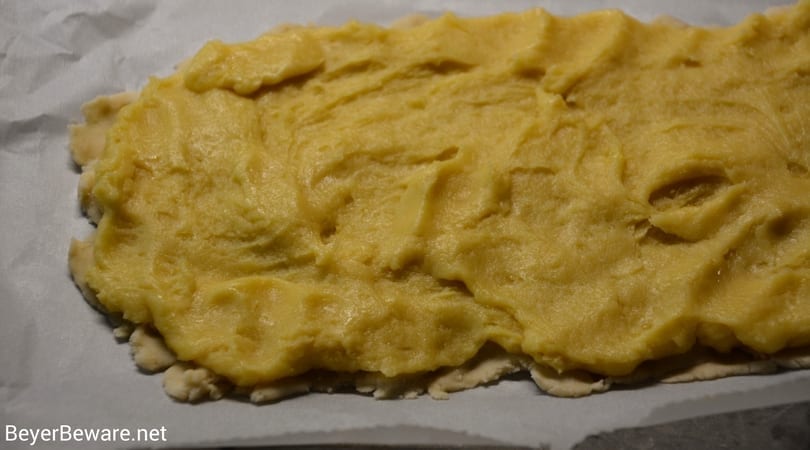 While the pastry is baking, make the almond glaze by combining melted butter, powdered sugar, and vanilla or almond extract.

Note the pastry will be high while baking, almost like a cream puff. When you take it out of the oven, it will fall. Do NOT worry, this is the way it should be. Go ahead and drench it in the icing. 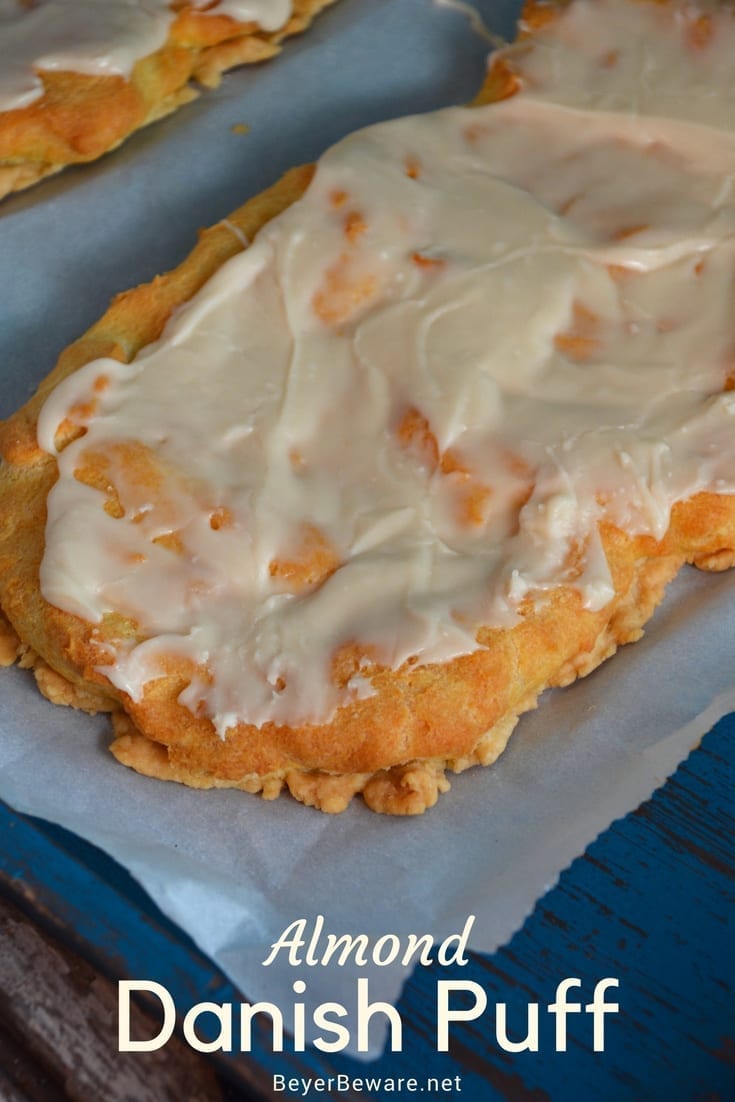 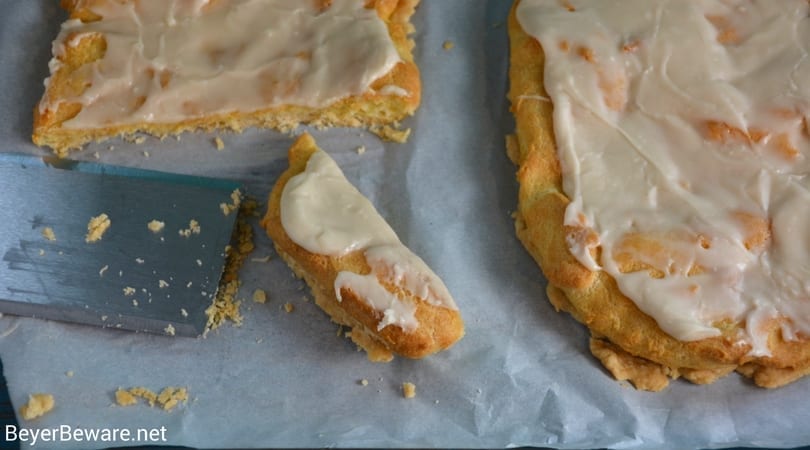 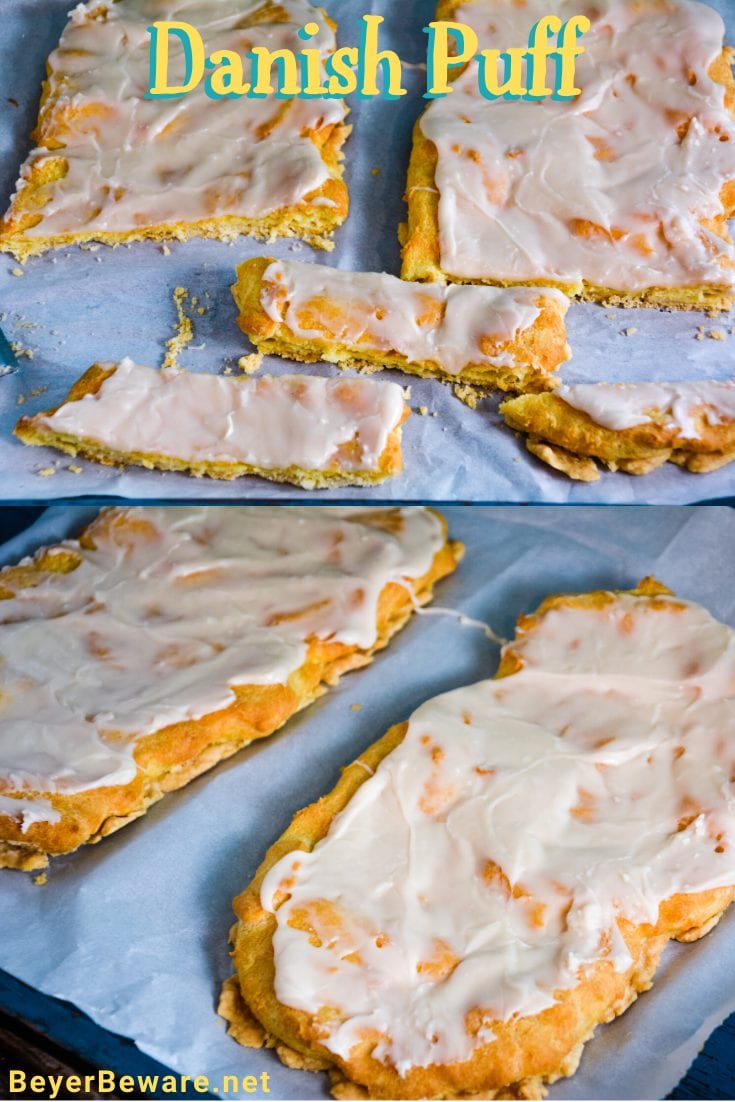 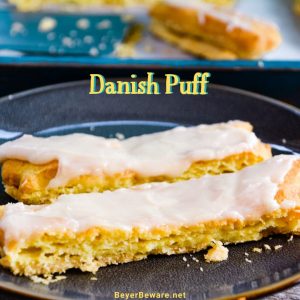 While baking, the pastry will be high like a cream puff. It will fall when you remove it from the oven. Do not panic. This is what it should do.