497 shares
Disclosure: *This post may include amazon links. As an Amazon Associate, I earn from qualifying purchases.
Jump to Recipe Print Recipe

Easy Apple Dumplings recipe is a 5-ingredient apple dessert that is made with store-bought pie crusts, apples, cinnamon and sugar, butter, and simple cinnamon and sugar syrup for the easiest apple dumplings recipe ever. With fall comes on the onset of apples everywhere. But, I have a confession. I don't really love cooked apples. Not crazy for applesauce. I am not all in on an apple pie with ice cream on top. However, my mom raves about the apple dumplings she makes straight from the mid-1970's edition of the Better Homes and Garden red checkered cookbook. Of course, I was like this can be made more easily than it suggested. And boy did I with these 5-Ingredient Apple Dumplings! 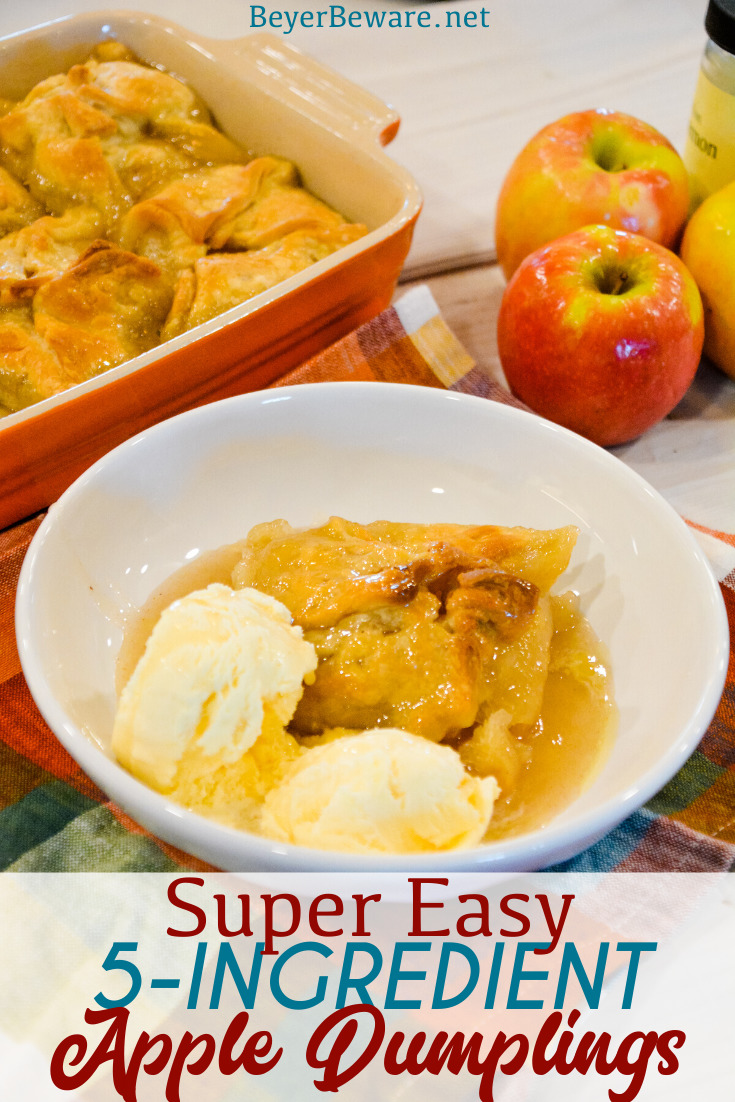 Super Easy 5-Ingredient Apple Dumplings are made with store-bought pie crusts, apples, cinnamon and sugar, butter, and a simple cinnamon and sugar syrup. These dumplings are so simple to make and taste so amazing with big scoops of vanilla ice cream your family will want them made on a regular basis. 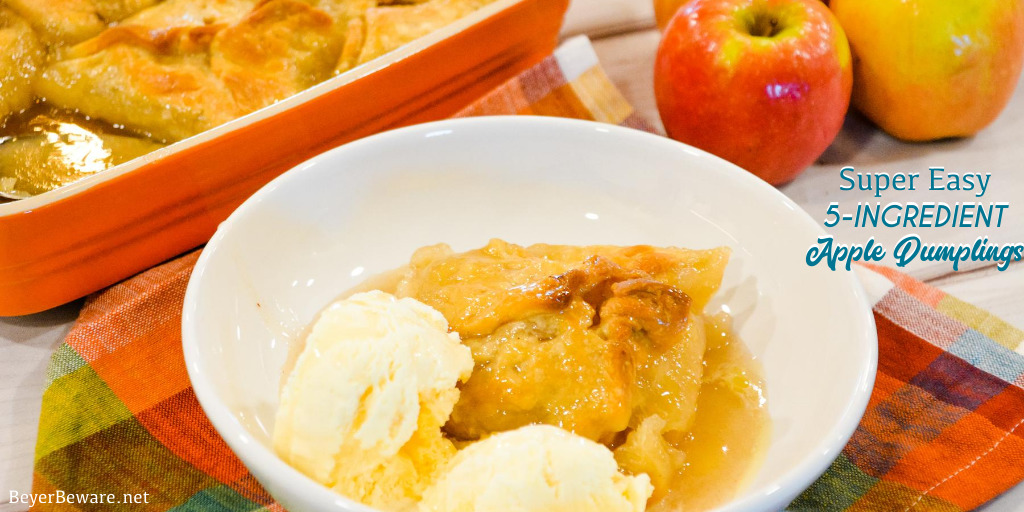 When a recipe has too many ingredients, I am exhausted before even starting the recipe. When my mom shared the apple dumpling recipe with me, I began to eliminate ingredients. Beginning with all the ingredients for the crust. I don't know why I have an aversion to making pie crust, but here I am refusing to make to it. 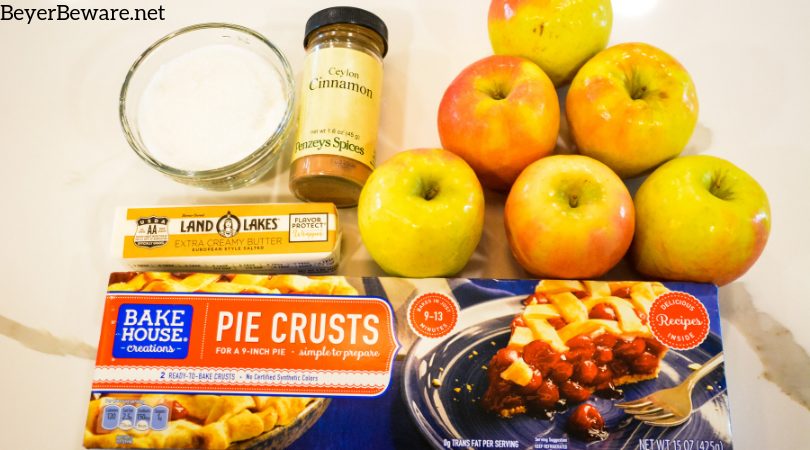 The five ingredients you need to make this super easy apple dumpling recipe are:

How to Make Apple Dumplings

Making this easy apple dumpling recipe requires three basic workstreams. You have to roll out the two pie crusts together, make a simple syrup with water, sugar, and cinnamon, and slice and peel the apples. I start by making the simple syrup. To make the simple syrup, combine sugar, water, and cinnamon. Bring to a boil and stir to dissolve. Remove from the heat and add butter. Stir until completely melted and set aside. 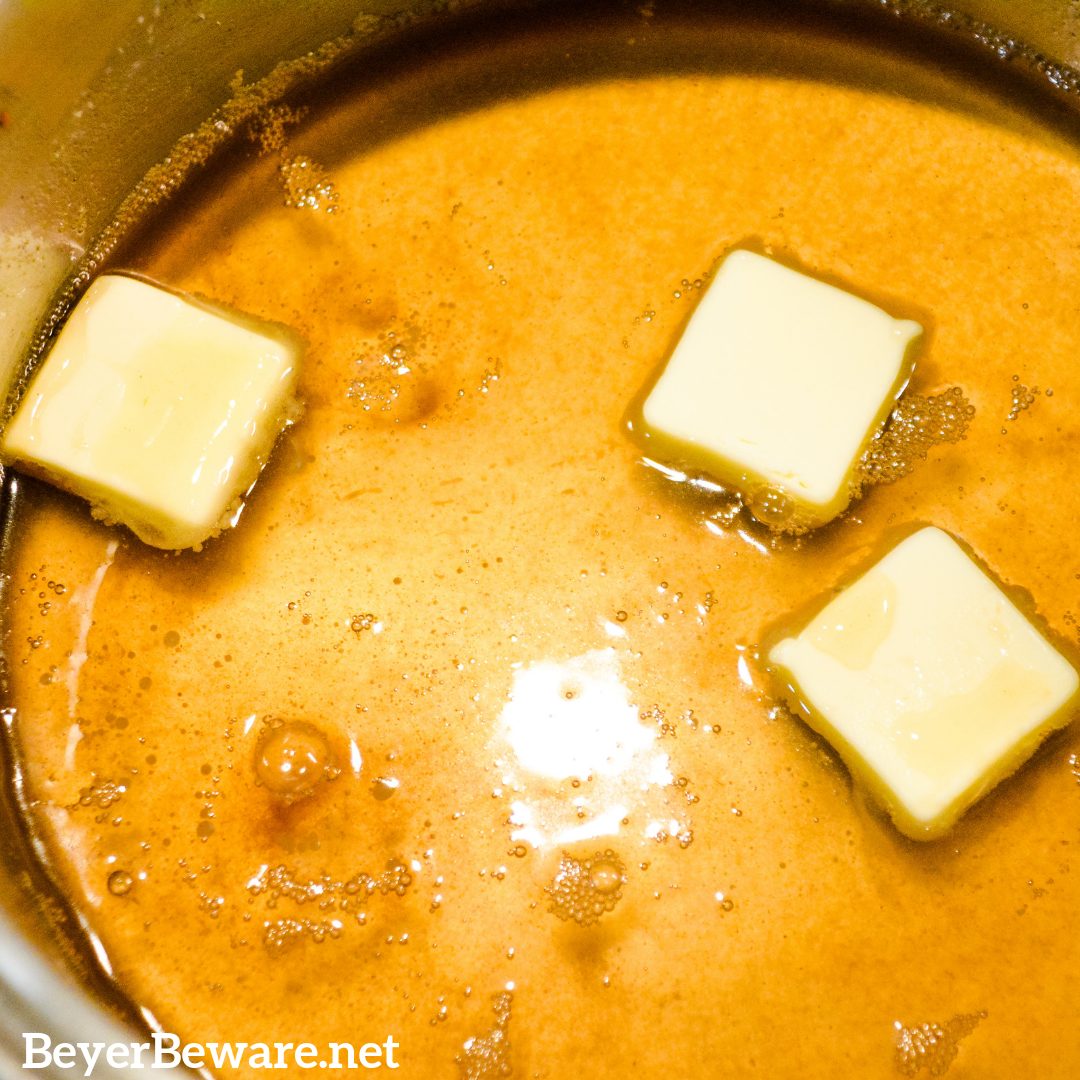 Rollout the two pie crusts together in a roughly 12-inch by 18-inch rectangle. You will cut six squares out of this rectangle to make the dumplings from. 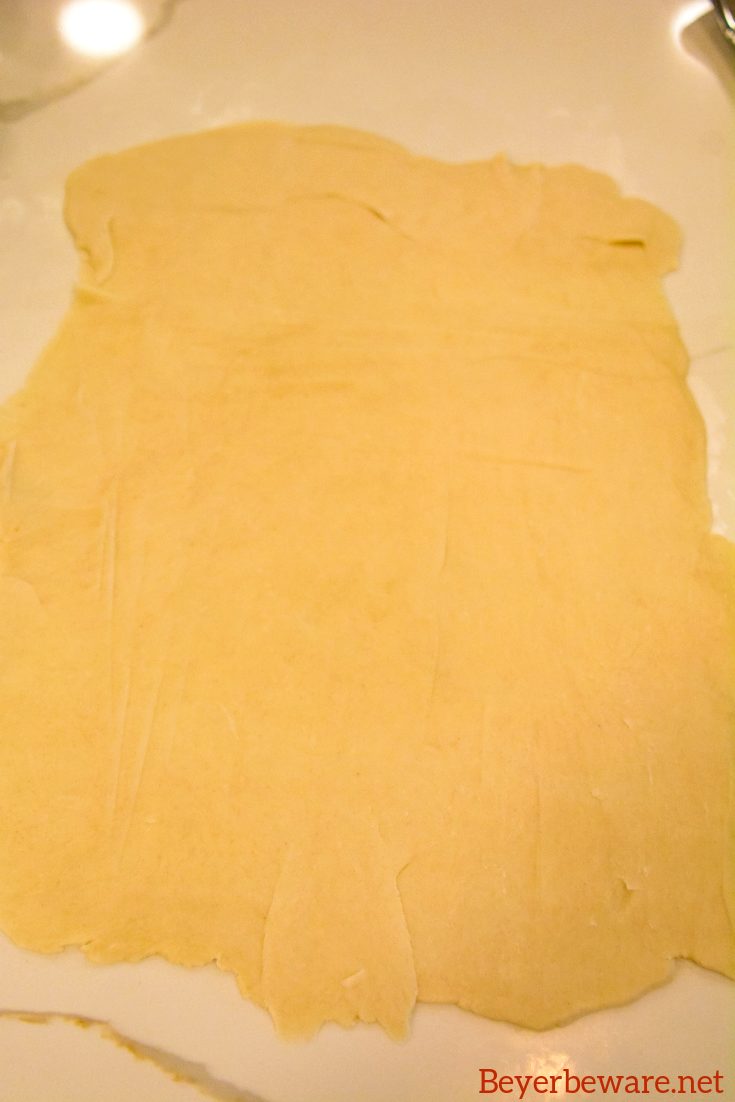 When the crust is ready, slice and peel apples. I used an apple slicer

and then peeled each slice of apple. 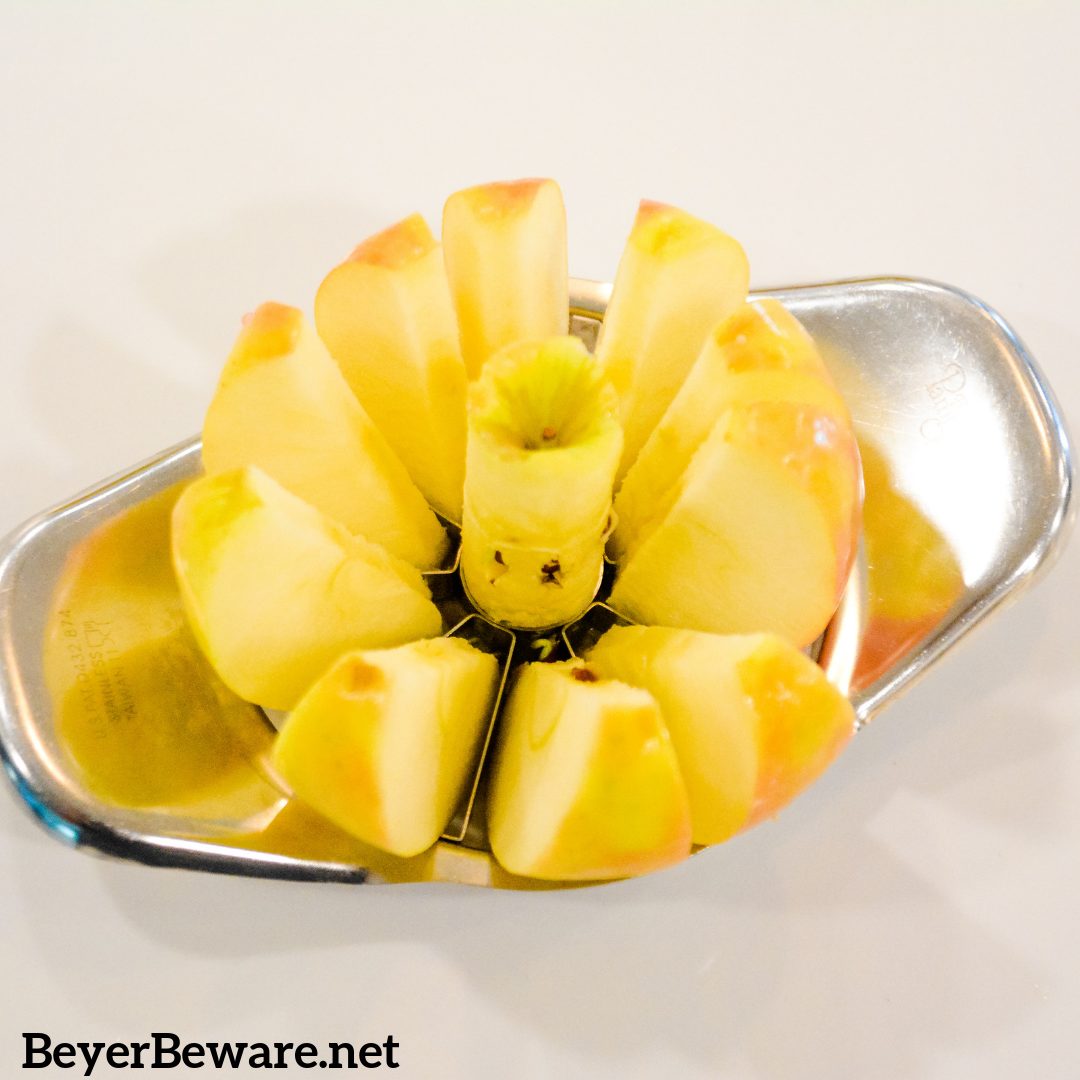 I piled them up and then had to fight the kids off from eating them. Peeled apple slices are like candy to my kids. 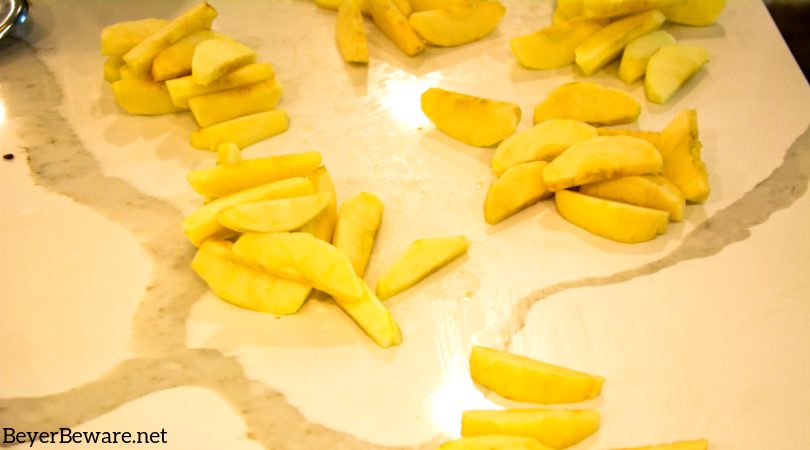 To each square of pie crusts add six or so slices of apples, a pat of butter, and sprinkle with cinnamon and sugar. Then wet the edges of the pie crust to pull up and around the apple slices to form the dumpling. 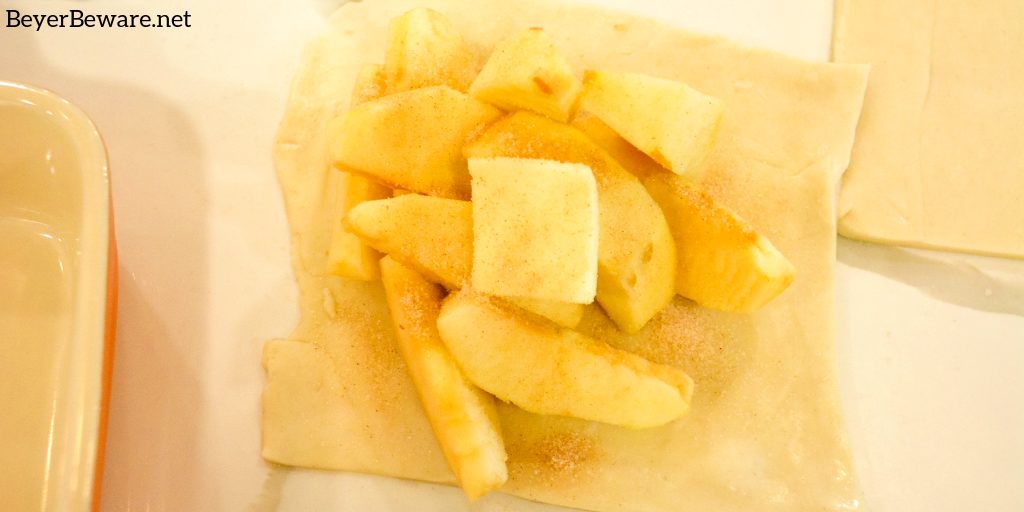 Place the dumplings in a medium baking dish. I used my Le Creuset 7x11 baking dish

. Don't stress on the dumplings being perfect. Mine was sort of a hot mess. 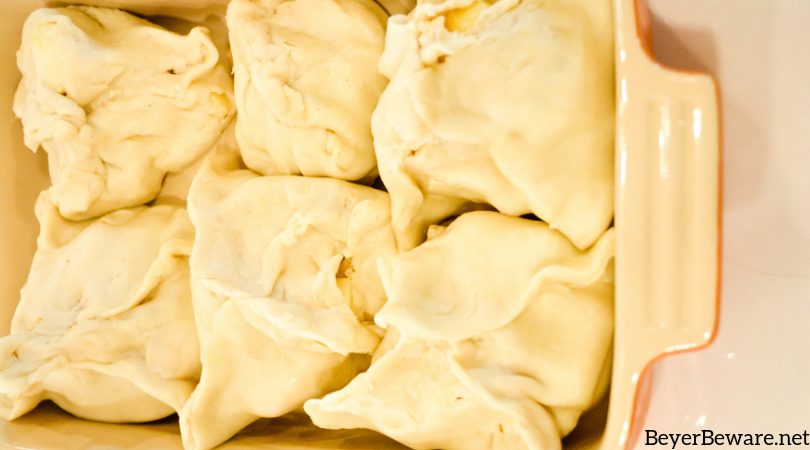 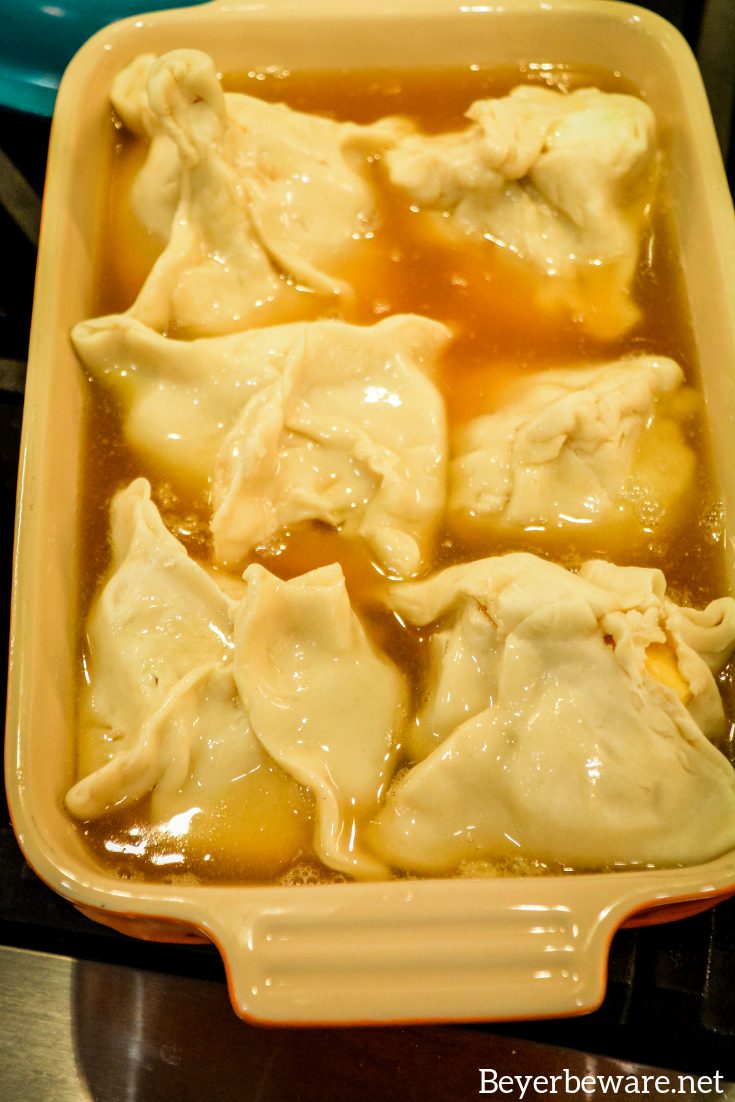 Bake these easy apple dumplings on 375 degrees for 35 minutes. I keep spooning syrup over the dumplings as they cook. When the dumplings are done cooking the crust will be a golden brown. 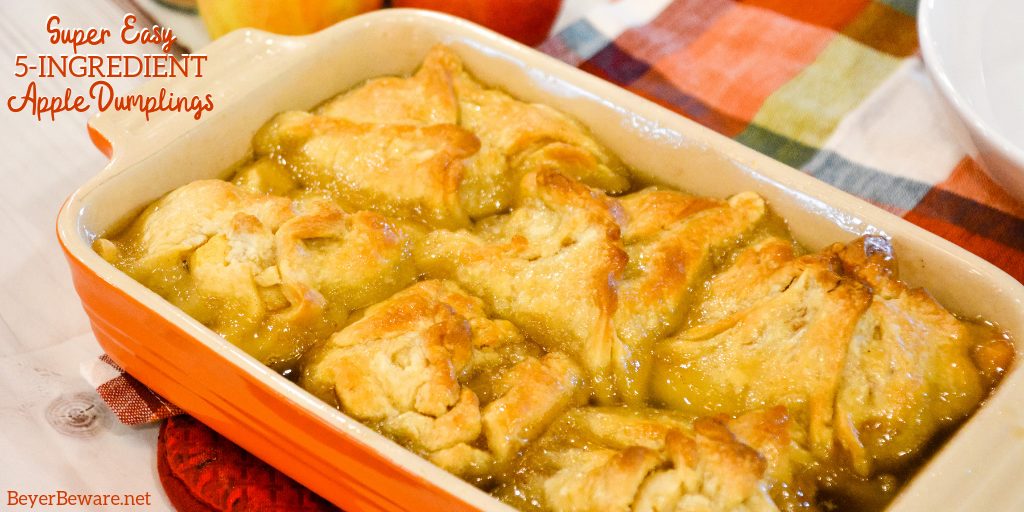 These 5-Ingredient apple dumplings have to be served with ice cream. However, if you are my son you also just eat straight from the pan with the serving spoon as well. 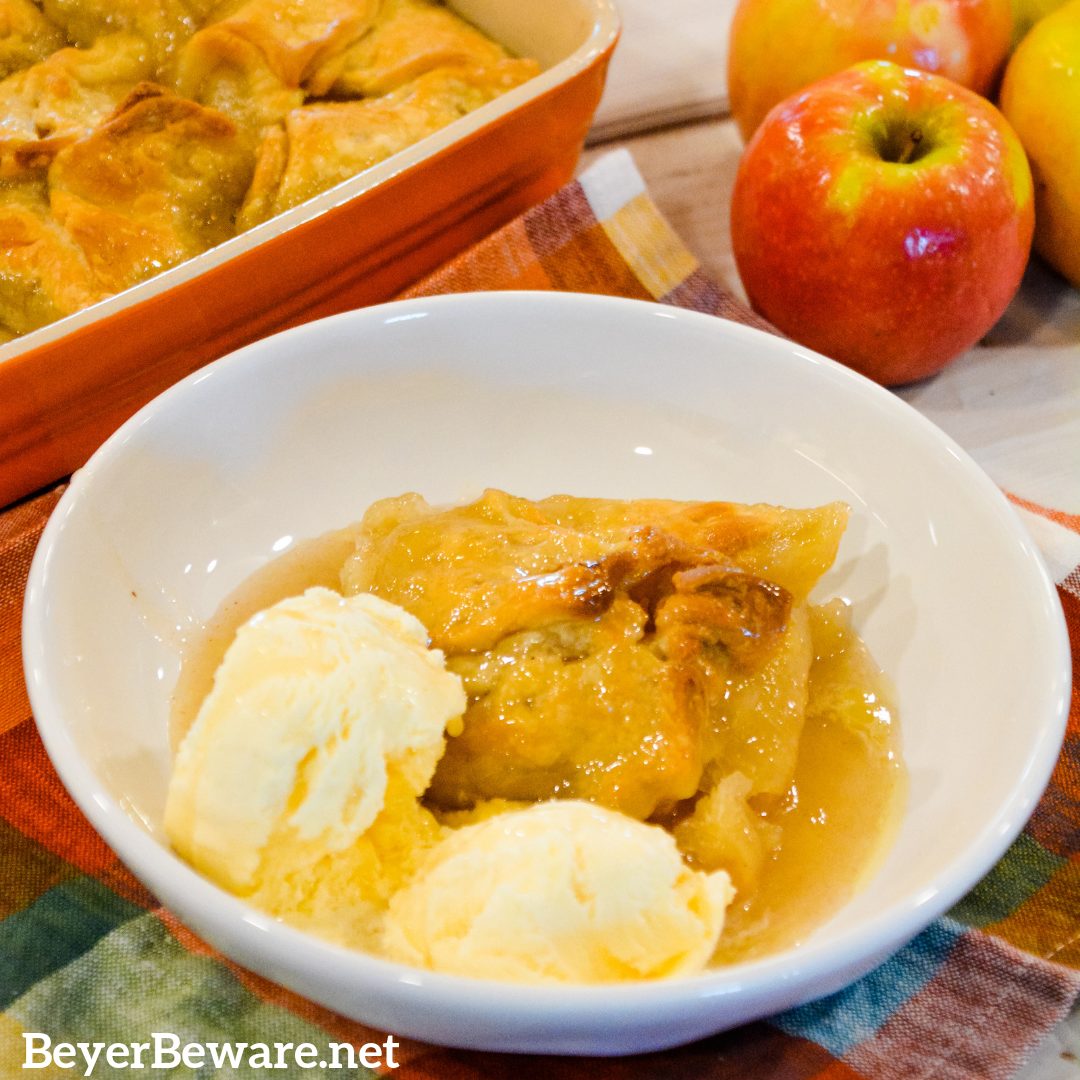 The easy apple dumplings will be your new favorite apple recipe this fall. 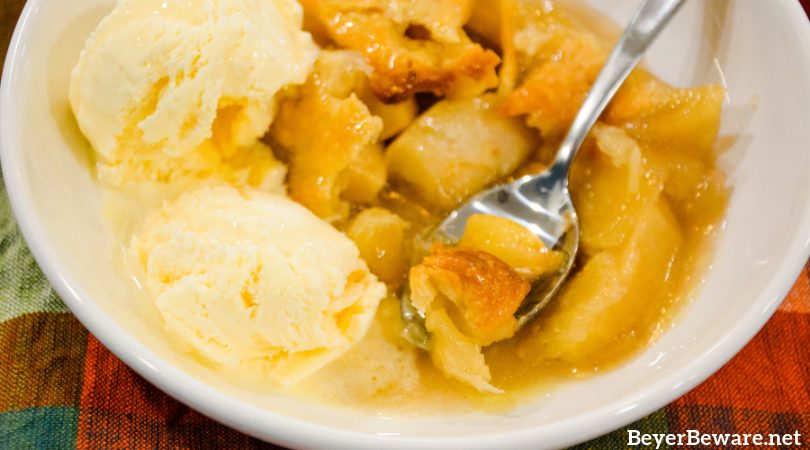 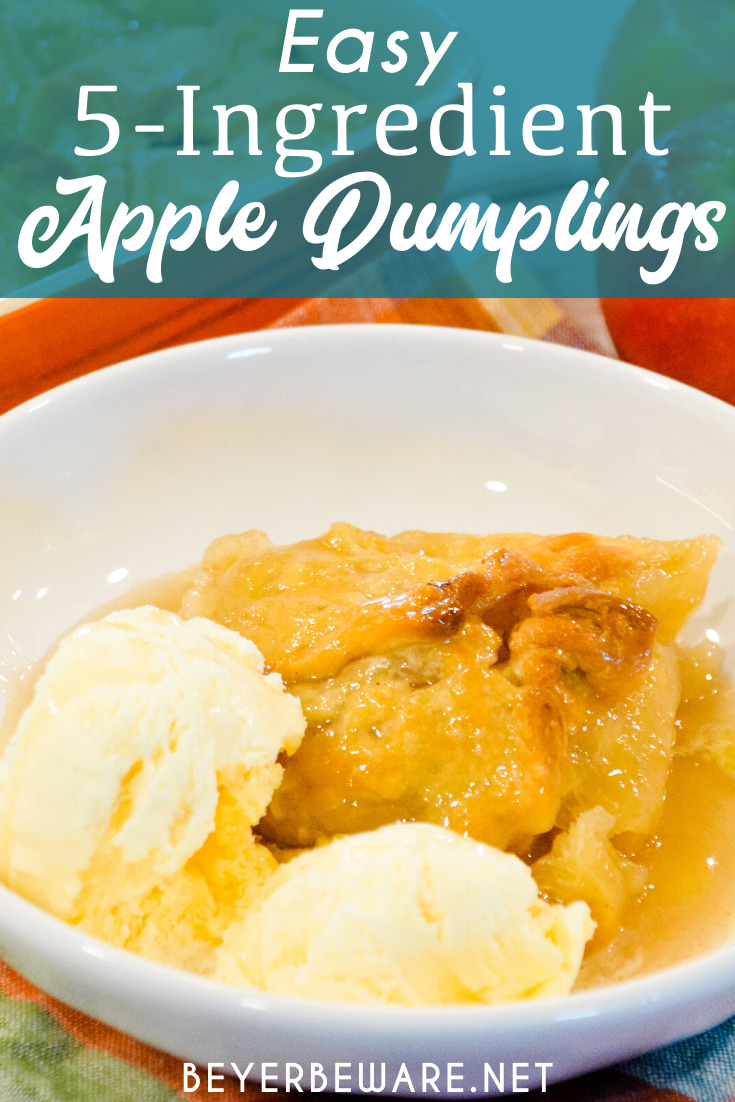 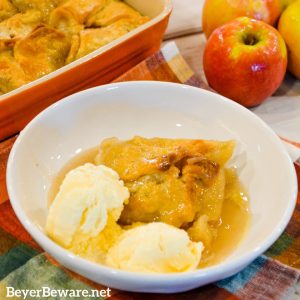