×
Recipes for Home » farm » 30 Days on the Prairie Farm Series » Are we fat, uppity Americans?

2 shares
Disclosure: *This post may include amazon links. As an Amazon Associate, I earn from qualifying purchases.

Let me be frank, we are fat, happy Americans. We bicker about what is the "right" way to raise everything from pigs to tomatoes. We pay more attention to the label on our food than the empty shelves at the local food pantry. And we don't just use our dollars to express what we think we push for more and more regulation on what food we deem not trendy enough for our liking in the name of fear. Yet, we are in the minority, dictating what those in the majority will all be impacted by in the long run.

Yeah, that describes me. I am feeling pretty blessed right now. We could dive into why 3 billion people  who can't read is unacceptable. Or we could go on and on about the fact that a million people dying each week from illness is inexcusable. But, I want to talk about hunger. So, think about it, 1 billion people go to bed hungry every night. Three Americas. A little less than all of China. Double that number and now you have all the malnourished. Do you think the 2 billion malnourished are a large portion of the 3 billion people who can't read? Do you think they could be connected?

Even though this infographic doesn't come right out and say it, the breakthroughs are GMOs. Genetically Modified Organisms. Yeah, those. Those things that some folks are worried could potentially be bad for us to eat. I am not a scientist. I don't understand all the science. Yet, I think technology is a good thing in other areas of my life. So, why wouldn't I want to have food utilizing biotechnology to make food even more beneficial? Especially to those who have food shortages.

Think about eating just rice for every meal for weeks on end. Nothing else. I am pretty sure besides being bored to death of the food, I would also start having other issues. And my kids, who knows what impact that would have on their growth and development. Now, imagine having a rice seed available that has nutrients that occur in the plant naturally thanks to biotechnology. Thanks to it being a genetically modified organism. 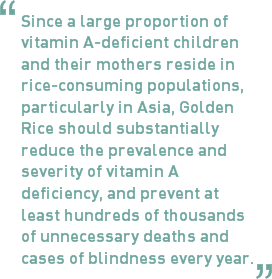 And that is golden rice. If you were a mother in Asia or Africa who had one of the 2 million malnourished children in the world, would you want access to this rice? Would you be worried about long term effects of the GMO on your child who was malnourished?

Before you jump all over me, I am not saying you shouldn't be able to avoid GMO foods. Eat what you want. I am just asking should you force an end to GMO foods, thus ending research and development for new GMO crops that could help nourish and feed the world? After all, some of the smartest people in the tech world are thinking it is important to invest in biotech to feed the growing world.

Be sure to check out the other tips and food tidbits as part of the 30 Days on the Prairie Farm Series.