1124 shares
Disclosure: *This post may include amazon links. As an Amazon Associate, I earn from qualifying purchases.
Jump to Recipe Print Recipe

When it is time for the Christmas ham recipe, this crock pot maple ham recipe is sure to be a family favorite and easy to prepare. With just three ingredients in addition to the ham, it is so simple, perfect for busy holiday dinners.

Did you know ham is the most consumed pork product? Mainly because the ham comes from the butt of the pig and most pigs got plenty of butt! In the U.S., nearly 65 million pigs are raised each year. It sounds like a lot, right? Don't worry, China has us beat with almost 300 million pigs. Interested in knowing more about where animals are raised, check out this graph from The Economist.

So, to make this crock pot maple ham, start with a spiral cut ham. I still had one in my freezer, so I put it in the fridge overnight.

How to make a spiral ham in crock pot?

On the day you will be eating your ham, start by placing the flat side down in your crock pot. Cover with about ½ cup of brown sugar and then pour ½ cup of REAL maple syrup over top. Finally, pour 1 cup of pineapple juice over top.

Then cook your ham on low for 4-8 hours. It will be heated through at 4 hours but there is plenty of juice if you pop it in before heading to work.

Carefully pull the ham out. It will be falling off the bone. I promise you!

How Long to Cook Spiral Ham in Crock Pot

It should take about an hour per 3 pounds to cook a spiral cut ham in crock pot, oven or grill on a low setting or 250 degrees. It will cook faster on higher temps but be sure to baste to keep it from drying out.

Leftover ham can be kept in the refrigerator or freezer. Here is guidance on storing the leftover ham.

I made up the Corn Chowdah Mac 'n Cheese from Rachael Ray's magazine this month to go with the ham. I substituted sweet potatoes for baking but otherwise followed the directions. It was yummy! And had a bacon top. The perfect match for the ham. Here are a few more of my favorite leftover ham recipes.

Crock Pot Ham and Potato Soup Recipe
Crock pot ham and potato soup is slow-cooked all day in a base of carrots, celery, onions, and garlic along with diced potato hashbrowns, ham, and cream cheese to make a hearty soup dinner.
Check out this recipe

Plus, we had plenty of leftovers! Which means easier meals all week! Yay!

How Long to Cook a Spiral Ham in the Crock Pot

It should take about an hour per 3 pounds to cook a spiral cut ham in crock pot, oven or grill on a low setting or 250 degrees. It will cook faster on higher temps or high setting on the crock pot but be sure to baste to keep it from drying out. 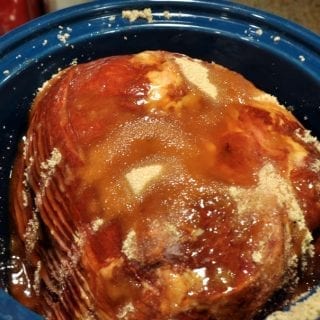