This Christmas I was given a gift that will be my most treasured for years to come. My paternal Grandfather is 95. His parents came to America in 1901. A strong, German-Lutheran family that turned some swamp lands of east central Illinois into their family farm.

It was a farm that would be considered a poly-culture by those wanting to return to the way we farmed 100 years ago. Simply means they had pigs, cows, chickens, sheep, horses, corn, oats or barley, hay, vegetables, and much more. Over the last 100 years the same farm now has a few hundred feeder cattle, corn, soybeans and wheat all being grown by my brother. 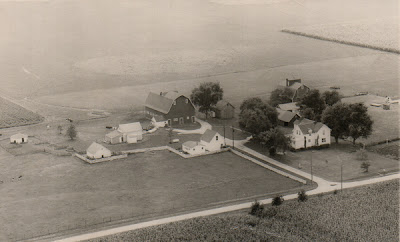 And when you have a farm like the above farm, you have to have a family that looks like this one. 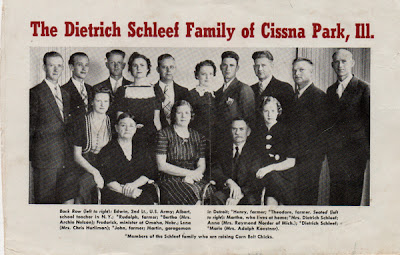 Yes, count them. 13 children and two parents who are still married to one another. At the time of this picture, my grandpa (far left) was still in the army. There was a little war going on at the time. The second world war. Most of his brothers were farmers or preachers.

My Great-Grandmother raised poultry. Even 80 years ago farmers were trying to find better ways for raising their livestock. 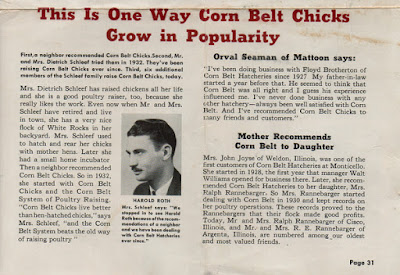 Well, recently grandpa told me about how he met my grandma. He was older (in his twenties) and his family thought he would be a bachelor all of his life. He had taken his mother to town to buy groceries for his sister, Anna, who had just had twins (I believe). When they returned from town, he helped his mother carry the groceries into Anna's home. There in the kitchen stood my future grandmother. She had been helping Anna with the babies as well. The rest is history. They soon had their brood. 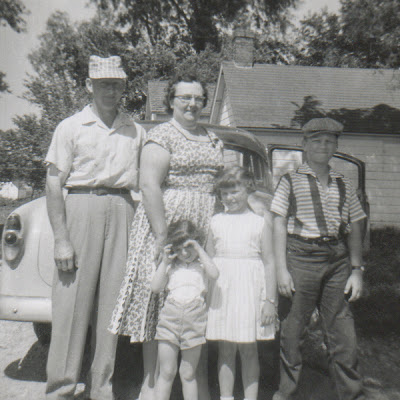 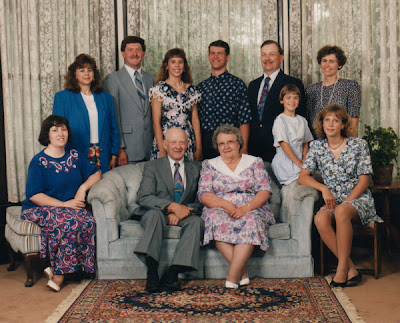 After the war, Grandpa returned back to the farm. 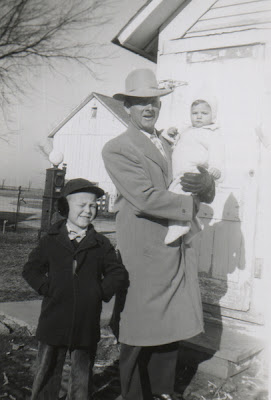 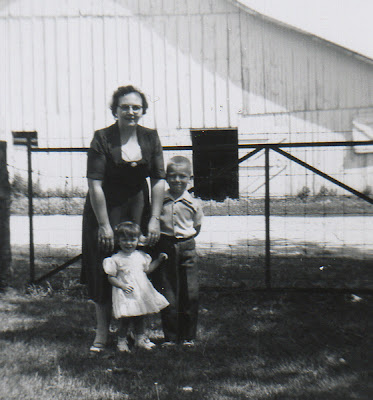 My Dad wanted to grow up to be a farmer too. He didn't farm full time, but became a large animal veterinarian to work with farmers raising animals that would be food for us all to eat. 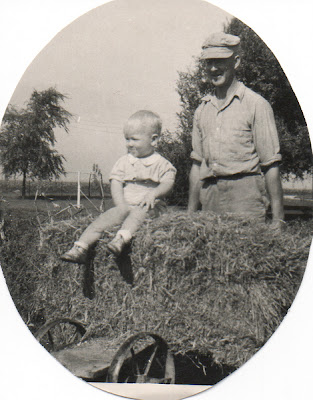 That genetic tendency was passed on to my brother. And he did take over my Grandpa's farm. Lives in the same house pictured above. 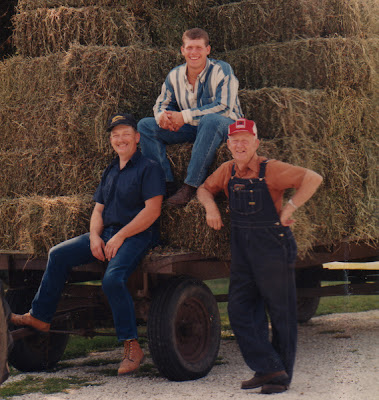 I got a feeling his son will grow up to be a farmer too. It is genetic. You can't escape it once it is in you. It isn't a job for these men, it is truly their passion.

I spent many afternoons begging for tractor rides. 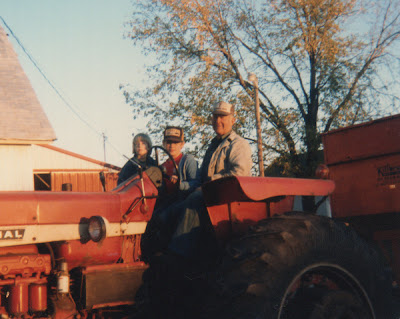 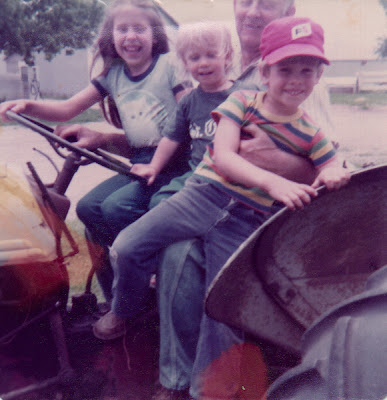 But, what I loved was just time at Grandma and Grandpa's house. I loved Christmas at their house. 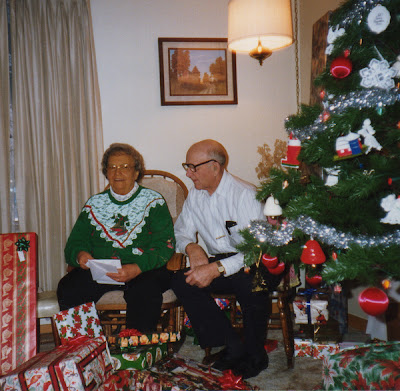 I remember them giving us way more presents than any kid needed, but the ones I remember the most. Sugar coated cereal wrapped up under the tree. Yeah, I longed for the day I could have a box of Lucky Charms at my house. I think I have three in our pantry now. I guess lack of sugar coated cereals has made me lose control as an adult.

Like any good German, Lutheran home, we sometimes dressed the part. 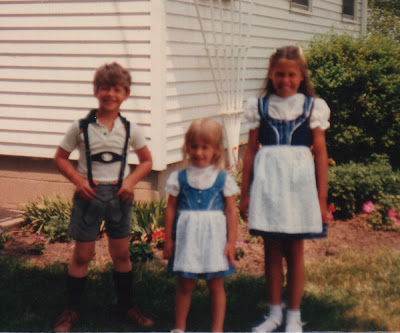 And family time was always important. I only have one cousin, so it was natural for all of us to be close. Especially close at our grandparent's home. Piling on top of Grandpa in his chair. 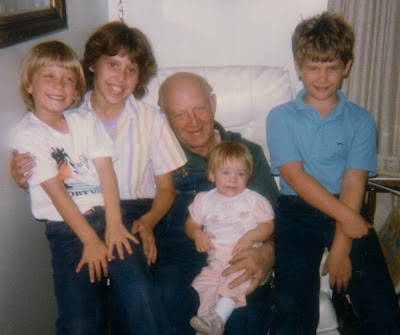 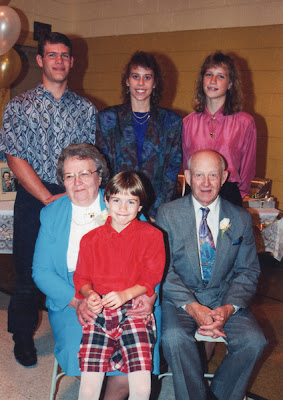 And at all of our weddings. 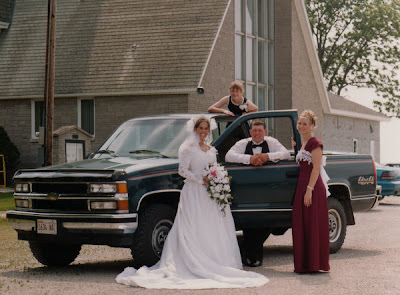 I am just so blessed to have my kids have the opportunity to know their Great-Grandpa. 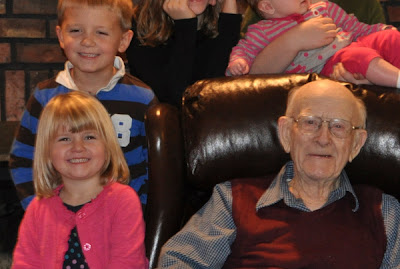 I feel honored to have great role models of what it means to stay true to your marriage. While, I have also learned that early on my grandparents agreed that grandma would tend to the house and grandpa to the farm, they were always a team. When we lost grandma nearly 15 years ago, Grandpa was lost in the kitchen. Maybe he should have paid a bit more attention to what she was doing all those years. After 50 years you would think he would have learned something. But, they were a team. 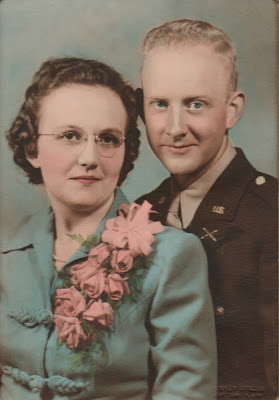 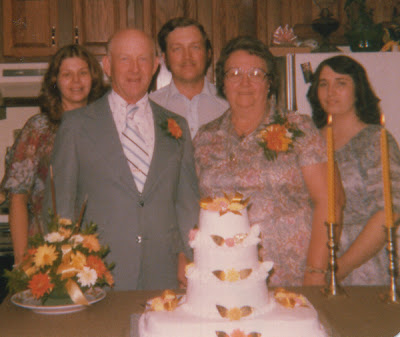 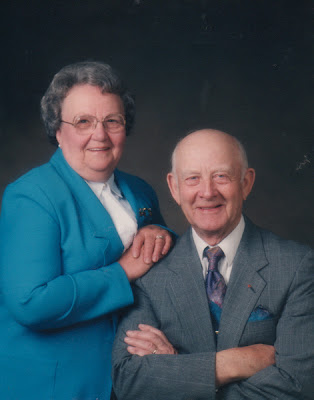 I am proud of my past. Proud of how not only has our family changed but also our farm. We have transformed our farm to not just feed our family and need 13 kids to help run the farm to feeding hundreds of people every year by the hands of one farmer, my brother.

So, next time you hear about how the American farmer needs to change how they are raising food, remember what that means. I am not against romanticizing about yesteryear, but I am not signing up to give birth to 13 kids anytime soon. I would rather embrace change and technology to feed more people on less, just like my Great-Grandmother did with her chicken raising back in the day.

Find other great women who love their family's farm traditions through Real Farmwives of America & Friends. Click on the badge below to meet my friend Heather, who is hosting the Real Farmwives Series.